We left Stressa on Lake Maggiore today and headed for Lake Garda for lunch. I have a new ritual now, each time we stop for morning tea I have a cappuccino and a chocolate brioche, they are a croissant filled with chocolate the consistency of say nuttella and are the yummiest things around. Some of the service stations here are amazing, they are like a servo, general store, deli and bottlo all rolled into one. I keep thinking if Merv got in one he’d never come out.

Lunch behind the loo on Lake Garda!!

Sirmione on Lake Garda was our next stop for a couple of hours. Went off on my own for a while then ran into Dale and Val so we had lunch together, right on the edge of the lake. We didn’t realize until after we’d finished that we were sitting right behind the public toilets – what you don’t know doesn’t hurt you I guess! Had yummy antipasti dishes to share and of course a glass of Proseco which has also become a ritual now.Dale had the brilliant idea to go for a paddle as we were walking away from lunch and went to walk down a little boat ramp. Val and I just kept walking slowly and next thing we hear this little voice calling “ladies, ladies”, it didn’t sound like her so neither of us stopped until she called again. We turned around in time to see her scrambling on all fours trying to stand up, absolutely saturated to her waist and laughing her head off. All I could think was good thing I didn’t join her as I had thought about it. They went straight back to the bus and Andrea got her suitcase out so she could get clean clothes and change on the bus before we all arrived. She ended up with a couple of whopping bruises but was okay and had another story to tell.I didn’t wear the crown for being late for long thank goodness. We waited for five minutes at the meeting point for Pam and Bill but they didn’t show so we headed back to the bus. Along the way they apparently phoned Gilberto to say they were on their way, they had been at the wrong place – they got back a bit more than five minutes after us and were mortified as they are really quiet people but it took the heat off me. 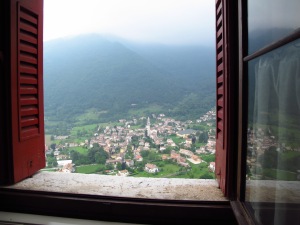 View from my room in Castelbrando

Next we drove towards the Dolomites and our home for the next couple of days above the village of Cison do Valmarino – CastelBrando. It’s an old roman fortress and looks out over the valley. It was in the Brando (I think) family for centuries. There are a couple of different parts to it but when it was sold and converted to a hotel they haven’t altered the original and have kept things very authentic. The bus stopped in the village below and we caught a funicular to the castle, like a cable car but runs up the side of the mountain on the ground not in the air, was a long way up. Our rooms were tiny but gorgeous and mine had a most amazing view, I couldn’t stop looking at it and taking photos.We had a great tour around with a lovely girl whose English was very hard to understand. I couldn’t work out what she was talking about half the time but I must have done better than some because there were lots of blank looks and shoulder shrugs and hands in the air – not just confused but practicing our Italian gestures! Once I worked out she was pronouncing ‘swords’ as it is spelt and not as we would say it some of her story made a lot more sense. We had our welcome drinks on the terrace and a beautiful dinner in one of the dining rooms. It was another great day!

Lunch behind the loo on Lake Garda!!

Dale after her Dip in Lake Garda

View from my room in Castelbrando

One response to “Day 5 – Castelbrando”