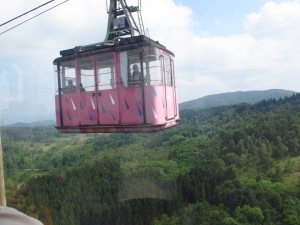 We had about 5 minutes after we got back from the islands to drop our gear and meet back in the lobby to head to the cable car station. Only 14 of the 30 in the group came along but I’m so glad I went as it was great fun. The cable car station was about 15 minutes walk from the hotel and it took close to half an hour to reach the top via 2 cable cars and a chair-lift. There was once a tram from Stressa to Mottarone but it last ran in 1963 and all the tracks were demolished not long afterwards

On a clear day you can see 7 lakes from the top of Mount Mottarone but there was a lot of mist and cloud around so we didn’t get to see them all but what we could see was spectacular.

Our tour guide had told us about a toboggan ride we could take while at the top so we all ended up having a go, terrific fun, just like a litter roller coaster ride – without the loops of course. The toboggans were double but I went on my own. You just controlled your speed with the brake/accelerator handles. At the bottom of the ride you were supposed to stay on and it then pulled you back up the hill in two stages. One of the guys had got off his and was standing there looking very lost when I came along so I offered him a lift not thinking what it would look like with him sitting between my legs when we got back to the top. He was really worried that his partner would find out so among the hilarity of it all everyone decided “what happens on the mountain stays on the mountain” –  even though it was totally innocent.

Another of the men had his tripod and I showed him how to set the timer so we took a couple of group photos which turned out really well. It was a great few hours and I think we all loosened up quite a bit with each other after the toboggan ride. There was a little inn where you change from the chairlift to the cable car so we stopped there for a drink. I had a shot that was a bit like Bailey’s Irish Cream except it had an eggnog type taste. It also had peach in it and was served warm – it was called something like “fille de fleur”. I asked the guide about four times and still couldn’t understand what he was saying so thought the best solution would be to just smile and nod! We almost missed the last cable car back down, we only made it by seconds – but then that’s where half the fun lies when you’re travelling isn’t it? 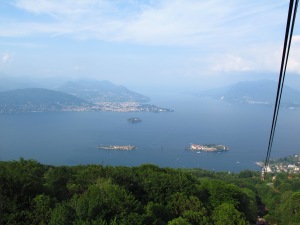 About 20 of the group went to a restaurant for dinner that night that the tour guide organized for us. It was just a normal Italian place where they passed around heaps of different dishes for first course, really rare beef and veges for second course and strudel for third. It was good to have proper Italian food instead of Americanized hotel food. I had my first taste of Italian red wine and loved it, no headache either! Dale’s captain turned up for a drink and a few more compliments, he didn’t get far with her – but he was entertaining. It really was the best day so far from start to finish.

Oh wow, the wonders of the internet! I googled the drink I had that I couldn’t understand the name of earlier and found this site. It’s called Fil da Fer so I wan’t too far wrong I guess – except I don’t know where on earth I got the bit about peach – must have been dreaming again!!

One response to “Day 4 – Mount Mottarone”