Our only fully free day today – needless to say for anyone who knows me, I had a late start to the day, although I was still early enough for breakfast!

I spent most of the day just looking around, did a bit of shopping and took oodles of photos. I found some great old derelict buildings and one place that was quite a way below the current street level making me think it could be rather ancient. I asked the tour guide when we went past on our way to the funicular station later if he knew anything about it but sadly he didn’t. Just another little teaser to add to my list for “next time”. 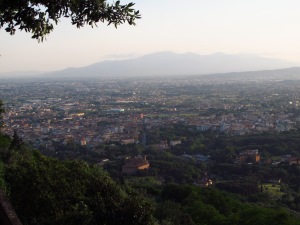 Had drinks in the garden before we headed up to Montecatini Alto for dinner. The funicular was very different from the one to Castelbrando, this one was really old-fashioned with cute wooden slat seats and lots of clickety claks. We had a little time before dinner for a look around, another village full of atmosphere. Dinner was again awesome. I am not a fan at all of pork and wouldn’t eat it by choice but I had the biggest meanest looking pork chop that was amazingly delicious. It was a really happy and relaxed night out and Roberto had the whole funicular  in stitches laughing on the way back down.

We walked past the cutest double tier carousel on the way there and back. I snapped a quick shot from the other side of the street thinking I would go back another night for a better one but I didn’t get back so have included the dodgy one here because I’ve never seen a double decker merry go round before!

Montecatini Alto from the funicular

One response to “Day 9 – Montecatini”