Part of the reason for my blogging is to have a record of the the places I visit and the people I meet, so forgive me for naming a few here, or skip it entirely! 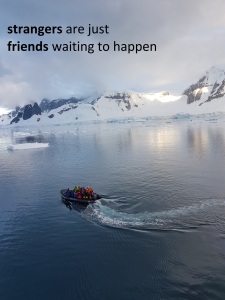 Of course, my German mates, they were full of fun but were also great to talk with about Europe and it’s way of life. Heather, Stewart, Catherine, Fiona and Myles, parents and three adult children travelling together. They’re spread all over the place normally but have a family holiday each year. They’re hugely entertaining and just all round nice people.

Bob, the Tom Hanks look-alike, from New Jersey, whose wife agreed to him having an amazing holiday in South America and Antarctica for his 50th. In a weird coincidence there was John, also from New Jersey and also celebrating his 50th in South America and Antarctica with his wife’s approval; that was pretty amazing. Agnès, who was my second roomie, originally from France who is now an Aussie. Her luggage didn’t make it to Ushuaia so she had to quickly run around buying things before boarding the ship, I’m sure I wouldn’t have coped as well as she did, she’s a troooper!

Andrew and his dad Tony who had people in stitches most of the trip – when Andrew wasn’t suffering sea-sickness! Andrew lives in Alice Springs these days but is from England where his mum & dad still live. We were talking about the seasickness patches one night and Tony told us a story that had me crying with laughter. This old guy went to the doctor one day awfully embarrassed. Turns out this guy’s wife was using HRT patches, each night she’d slap one on her leg, thigh, where-ever. The trouble with this was the guy kept waking up in the morning with these patches stuck to himself! Tony’s punchline was along the lines of  ‘his boobies were growing’! Obviously it looses something in the rewriting but to hear Tony tell it in his broad norther accent was totally hilarious.

I couldn’t forget Karen, who helped me with my sleeping bags when we camped, Staci & Fredrik, Giovanni and Costanza, Marco and Catarina on their honeymoon, the 4 bubbly girls sharing a room, Adam from Melbourne and his other 3 roomies, Mary and Bruce, Ariel, a 10 year old and the only child on the boat, travelling with his parents, the list just goes on…. The 4 Portuguese men, one of whom was my kayak partner, the older two were brothers and the younger were their sons, didn’t get to have much conversation with them because it seemed only one had much English and my  Portuguese is pretty much limited to hello and thank-you, although there were always smiles and a few words here and there. Michael Jackson and his Mum from America – I never did get round to asking if he’d changed his name by deed poll!

The number of young people on the boat surprised me, lots of couples in maybe late twenties or early thirties and probably 8 or more singles in their twenties. They were from all over the world but one recurring theme it seemed, especially with the younger travellers, was their wish to have visited all 7 continents – and some of them by the time they were 25, 30 or 40. That had never entered my head, I just became fascinated with Antarctica after visiting the Hobart Museum last year, but on reflection, I’ve now been to them also – mind you my age is vastly more than theirs!

As I’ve said before, the ship crew and expedition staff were amazing. I won’t quickly forget Marijke, my roomie, Louise who almost cried when I showed her the kayaking sketch featuring herself, Johnny who rescued me with a couple of packets of unmentionables I’ve become slightly addicted to again recently, (nothing worse than cigarettes), and all the others who made this trip so memorable.

Most of my travels have been totally independent so it this list seems a tad overboard to me, but I guess this is showing me organized tours do have their advantages. I also keep remembering something one of the young couples said to me, who’s names I never found out, even though I spoke with them heaps. They said – may we meet again – what a lovely farewell after such an adventure. 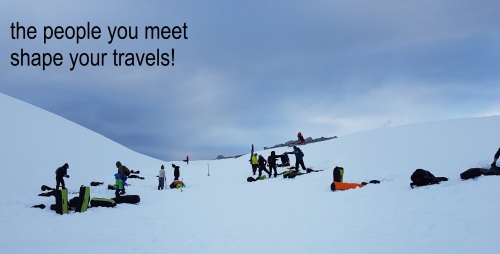 2 responses to “People I met”