Isn’t it funny how you tell yourself you’re only doing something for your own benefit but then stress yourself silly trying to make sure it’s wonderful? Well, I really was writing about my travels for my own benefit, but seeing as I made it public, so family and friends could have a look if they wanted to, well, of course, then I have to try and make it interesting and give everyone a chuckle or two, and that’s often easier said than done for me. Soooo, because one of my daughters keeps telling me I seem to be having trouble with my memory (could I be just not taking enough notice of things?), and because it’s getting close to a year ago – I’ve decided to try to add a new post more often, even if it’s mostly photos. Doesn’t sound like much of a commitment, but I really do want to try to commit as much as I can to computer before I do forget it all. So here goes, travel back in time with me to France last July.

When I was thinking of doing this trip, one of the things I was most keen to do was living in Paris for a month – I lasted just short of 3 weeks. I’m not sure why, I really tried hard to love it, but I just didn’t. I’m sure my home stay situation and associated tummy troubles had quite a bit to do with it; and maybe the fact I’d been away from home for 3 months didn’t help either. I’d like to come back again though and give it another go because I know there’s heaps more to see and do. I was a tad sad to say goodbye to my little apartment and the tower but Arras and the WW1 battlefields were calling me. 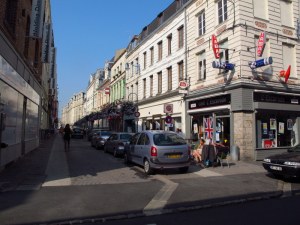 Which way to go?

I often say to myself, “today I am not going to get lost, I will find my way with no problems” – and guess what???? I found my way from the train station to my hotel with only one tiny weeny itsy bitsy unintentional detour – woot, woot!! I also stood at an intersection looking from my phone to every conceivable spot a street name could be hiding for a while, before a helpful guy at a café took pity on me and called out the street names. So funny, how sometimes you don’t even need to ask, if you look lost enough, someone will help – AND this was France, where they’re supposedly the most arrogant people on earth. 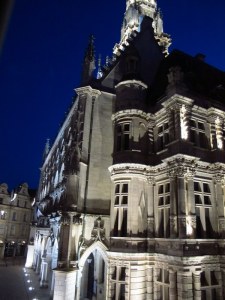 The Hotel Diamant was tucked away in the corner of a wonderful big square, the place des Héros, almost next door to the Town Hall. Even though it was only just after lunch, I collapsed on the bed and slept for an hour or so – I almost felt like I relaxed for the first time since arriving in France. Although I love to see the big cities and all they have to offer, it is nice to be out of the rush and crush of Paris, in a small place again where the pace of living is more like home and also where personal security is not such an issue. Feeling quite refreshed after my nanna nap I had a wonderful wander around and found the Grand’Place, another huge square bounded by buildings with the same unusual facades, followed by a mellow couple of hours at a cafe near the hotel having a few wines, some great fresh food and some sketching time.

Bye-bye Paris and the tower

One of the square of Arras 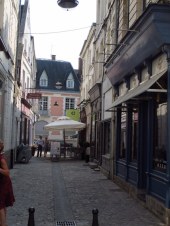