Tour boat on the canal in Paris

With so many possibilities in a city like Paris, sometimes you get spoilt for choice. I’ve been feeling quite overwhelmed most of my time in France – it’s all so……. well…….French. I’ve really immersed myself, heart and soul, in Paris and everything french and it’s hard work on my own.

I think I made a good choice today to go to the Canal St Martin, so very peaceful, relaxed, down to earth and not so hectic. I even stumbled across the very un-French backpacker place, St Christopher’s Inn, where everyone spoke English, the food was very American and they had rugby on the big screen tv’s – made me feel quite at home. Almost right outside the inn was one of the unique bridges, pont de Crimée, across the canal; it’s hydraulic and lifts to let boats pass under – pretty cool to watch, as it’s so tiny.

After a long walk along the canal, (where I was totally intrigued by the urinals), and back to my starting place, I caught a boat cruise lasting a few hours. We navigated, I think, 9 locks, passed through a couple of bridges that opened to let us pass and under some really pretty footbridges. There’s even a long stretch of the canal between Bastille and Republique that’s been covered, it was quite eerie gliding almost noiselessly along in near darkness.

Gliding along the canals of Paris

It gave me a nice insight into different parts of Paris. In one direction we passed massive new cultural areas with science and music museums and futuristic building. Then the other way was more like the Paris I know, slightly shabby (okay, sometimes more than slightly), sometimes chic, sometimes just everyday ordinary, but always interesting. I enjoyed the commentary, and yet again, I wish I could remember all I heard!

It’s strange to think the canals were the brainchild of Napoleon built back in the early nineteenth century to bring fresh water to the people of Paris – I usually associate him with war! They were also used industrially but now it’s mostly tourist boats using them.

End of the ride along the canals

I wasn’t prepared for the fact I’d finish the cruise at a different place to where I started, but I think I’m becoming quite used to the unexpected. I just followed the crowd for a while, did some window shopping, had a coffee and cake, then found a metro station to take me home – if all else fails, take the metro!!

So ends another day in Paris – actually my next to last day in Paris! Tomorrow I’m off to the French countryside. 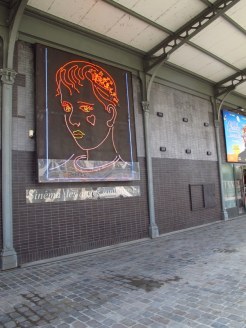 Along the Bassin de La Villette 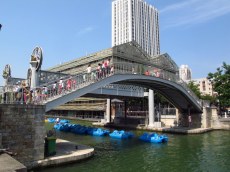 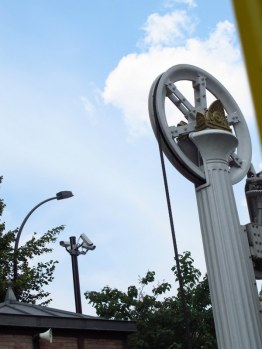 Detail of the lifting bridge 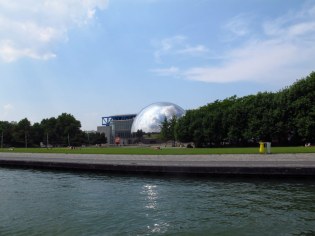 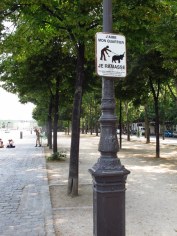 Urinals along the banks of the canal in Paris!!!!

Watching the world go by along the canals of Paris

Cute boats on the canal

In the underground canal

Lovely apartment balconies in the 19th

Home again, back in my neighborhood