Had a bit of a meltdown last night, missing everyone dreadfully and feeling lonely, but this morning I got a fantastic text from saying they’ll be here for a few days, so I’m feeling better now and looking forward to their arrival.

Today I visited the Musei Capitolini, what a marvellous place to spend the day – utterly captivating. I was told I should make sure to spend a few hours for a good look around but I was there all day and could have stayed longer. The special exhibition was Lux in Arcana, The Vatican Secret Archives. It doesn’t matter where I turn in Rome I run into all things religious – still with mixed feelings about it too, but in saying that I was utterly engrossed with the history. The beginnings of the  museum reach back to when Pope Sixtus IV donated a number of bronze statues to the Roman people in 1471. Apparently there were many donations to the museum made by popes over the next few centuries but it wasn’t open to the public until the seventeen hundreds. 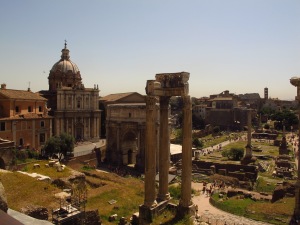 There is just so much to take in when you visit a place like that, the paintings, the statues, the coins, the Epigraphic gallery, it was all incredible. I was blown away when I walked out on the verandah of the Tabularium and realized I was looking over the ruins of the Roman Forum. Those are the times I appreciate being on my own to just stay as long as I want doing nothing but soak it up (and take a hundred photos), but at the same time I wish I had someone to turn to and just know they were thinking the same thing – we’re so fortunate to have this experience. I also loved the courtyard where the pieces of the  giant statue of Constantine are placed along with slabs of reliefs and other statues. There was just something about that courtyard that gave me a good feeling, it might have been the colour of the walls or the way the sun was falling on the statues but it felt peaceful.

I had a lovely lunch at the cafeteria looking over the rooftops of Rome and at the end of the day I wandered around the forum for a little look before heading back to the hotel totally footsore and tired but oh so happy. I still can’t believe this is me having all these great experiences but don’t pinch me, I’m not ready to wake up yet!!

Statue in the Gardens, Musei Capitolini 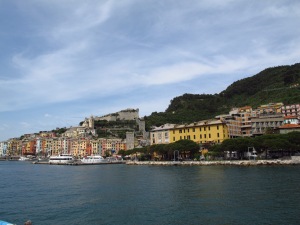 It’s just one day after another of unbelievably beautiful places to see. Cinque Terre today – how could I not be excited! Had a short drive to La Spezia to catch the boat to our first stop  of Porto Venere. Arriving from the sea was just like you see on postcards, gorgeous coloured houses clustered around the bay. It was a lovely little village and not very busy when we were there, maybe later in the day it would be worse. Dale & I walked to the Gothic Church of St Peter and the Doria Castle for a hit of history, but I can’t go past the cute little alleys for photographic ops. At the moment they’re my happy place.

I saw the funniest thing at Porto Venere, a couple of women were sitting outside their shop on the steps and there was another older woman leaning out of a window above them. She was watching them with the most inscrutable look on her face. I was trying to work out if she was just listening to them or if she was angry but by the time I thought about trying to sneak a photo of them they all moved – darn!

Next on the list was Monterosso by train as the weather had deteriorated and the boats weren’t running. It played havoc with the poor guides plans but you can’t help bad luck can you? Even though the village is recovering it was sad to see the evidence of last year’s terrible floods and landslides all around. One consolation I guess is that at least we are helping their economy by visiting and spending money there. I am sure Gloria, Frank and I found Monterosso’s smallest room for a toilet at the café where we had lunch. It was so, so tiny, about the size of a broom cupboard. We had a good laugh about it but it also made me realize how much we take for granted at home and how fortunate we are in good old Australia. Even though they had the tiniest closet for their loo their food and wine were scrumptious.

Another train trip took us to Manarola, the second smallest village of the five that make up Cinque Terre. We didn’t have a lot of time here though I did find an interesting water wheel where I spent some time trying to be creative with the camera. I feel ungrateful to say it and I had an amazing day but would have preferred to only visit two villages today. For the first time, it felt like we were just trying to fit too much in and rushing from one place to another without really doing any of them justice.

By the time we got off the train back at Montecatini that afternoon we were well and truly ready for a nice refreshing shower and a couple of wines. Oh the joys of travelling!

Our only fully free day today – needless to say for anyone who knows me, I had a late start to the day, although I was still early enough for breakfast!

I spent most of the day just looking around, did a bit of shopping and took oodles of photos. I found some great old derelict buildings and one place that was quite a way below the current street level making me think it could be rather ancient. I asked the tour guide when we went past on our way to the funicular station later if he knew anything about it but sadly he didn’t. Just another little teaser to add to my list for “next time”.

Had drinks in the garden before we headed up to Montecatini Alto for dinner. The funicular was very different from the one to Castelbrando, this one was really old-fashioned with cute wooden slat seats and lots of clickety claks. We had a little time before dinner for a look around, another village full of atmosphere. Dinner was again awesome. I am not a fan at all of pork and wouldn’t eat it by choice but I had the biggest meanest looking pork chop that was amazingly delicious. It was a really happy and relaxed night out and Roberto had the whole funicular  in stitches laughing on the way back down.

We walked past the cutest double tier carousel on the way there and back. I snapped a quick shot from the other side of the street thinking I would go back another night for a better one but I didn’t get back so have included the dodgy one here because I’ve never seen a double decker merry go round before!

Montecatini Alto from the funicular

Day 8 – Firenze on the Train 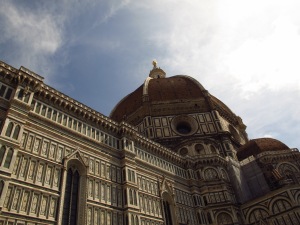 I had no idea we were so close to Florence – again my lack of knowledge is embarrassing, sorry. After a little stroll to the train station we tootled off to Florence with the commuters this morning, about 45 minutes later we were there with thousands of others.We met our Florentine guide near the Duomo and were treated to an enormously knowledgable guys take on Renaissance art and the stories behind it. The problem I had with it was it seemed more like an art history lecture than a gentle introduction for a group of tourists. We also visited the Uffizi Gallery and the Academia which was mind-blowing but again we were ushered to special pieces of art and given a lecture then moved on to the next one on his list. At least I know now that I would like to go back but maybe with an audio guide and take my time because I did enjoy the place just not how we had to see it this time. Our walk outside with him was much nicer and the little streets captivated me as they do everywhere I see them.

When we were left to our own devices I was heading towards the river and ran into Jenny & Dorian and spent the rest of the afternoon with them. We had a lovely lunch, did some leather shopping and explored the Ponte Vecchio. I found a Pandora shop there and bought myself and the girls a Fleur de Lis charm for our bracelets. We pretty much just wandered aimlessly taking it all in and generally had a great afternoon. It’s funny how you gravitate to people and I find it quite curious how similar Jenny and I are in our likes, dislikes and sense of humour. She said to me one day how you don’t expect to get to your 50’s and find some-one you immediately connect with like we have. We can keep each other amused talking and laughing non-stop on those long driving days with Dorian adding his two bobs worth to our discussion and telling us now and then that we are mad – but then all the nicest people are aren’t they!

It was another “Oh no, where are they?” experience at our meeting point before heading back to the train station. This time is was Gloria and Frank who were no-shows. We waited about 5 minutes with us all craning our necks looking for them to no avail before we started back. I was a bit concerned for them because they are such a sweet quiet older couple but at least they can catch another train even if it is a later one, it’s not like being late for our bus, now that would be really awful. We had about a 15 minute walk back to the station and were almost there when they caught up to us, they had almost run the entire way in between stopping to ask for directions. The poor loves were waiting in the wrong place and were so relieved to see us and most of us were the same – big hugs all round with our tour guide standing by tapping his foot saying “andiamo, andiamo” – we had a train to catch!! Gloria and I had a great laugh later about karma being a b*#%c – she had teased me the most and sung “why are we waiting” for days after I was late on Isola Bella.

Well it’s been another of those wonderful days. I’m having an absolute ball seeing all these things for myself that I’ve read about for so long and finding so many lovely people to share them with is quite awesome. Ciao until tomorrow.