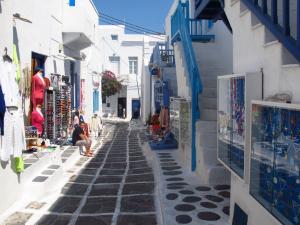 Do you know that feeling when you’ve got all day to shop and you don’t really feel in the mood or find anything you like and then an hour before the shops shut all of a sudden it hits you and you run around madly buying things and having a great time?? Well, so do I – and that’s a bit what Mykonos was like for Sarah and I, bugger!!!

We’d had a lovely time until now but nothing really to write home about and then we walked to town this morning and found the cutest, prettiest little streets, shops, cafes – you name it, we found it.

Lovely shop under the windmills – Mykonos

SOOOOOOO of course, we dashed around like mad things trying to see, photograph and experience it all before we had to leave for Paros. We found the hill with the windmills and spent ages in the shop there chatting to the owner about the jewellery he makes and sells – and bought a few pieces as well as a little ceramic fishing boat that I just fell in love with. He told me it was called Lady of the Sea. We wandered down to Little Venice and had lunch at a café named Venezia – highly original name (not) but great food and setting right on the edge of the water. 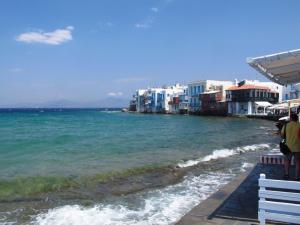 We could have spent days wandering around but it was back to the hotel then the port for another hydrofoil to Paros this afternoon. I don’t think I’ve stayed anywhere before that had such lovely staff, they are all so friendly and genuinely helpful without being obsequious. Really we couldn’t have had anything better – food to die for, day-spa on our doorstep, sea views in a beautiful hotel. Just what you imagine the Greek Isles are all about I guess – kinda sad to leave in a way but looking forward to what’s next.

It was a much shorter trip than the last one, maybe only an hour or so and we were like seasoned travellers this time – only problem is our luggage is getting heavier already. We had a chuckle at the rep’s sign with our names – apparently we are now Mrs and Mrs – guess that’s what happens when you’ve come from Mykonos.

The minibus we were directed to made a few stops dropping other guests at different places that didn’t look to be in terribly wonderful locations. We were both getting a bit worried about where we’d end up and whether our trusty Flight Centre guy Dan had kept up his hundred out of a hundred score for picking awesome places to stay. Then we headed out to the country – and we really started to raise our eyebrows as we passed paddocks and straggly crops with a few animals thrown in for good measure. But …….. Dan had done us proud again, of course, we shouldn’t have doubted him. We were being driven to the other main town on the island – Naoussa. We’re staying at Kanales in a one bedroom suite with a huge rooftop balcony on the highest level and it’s simply gorgeous. 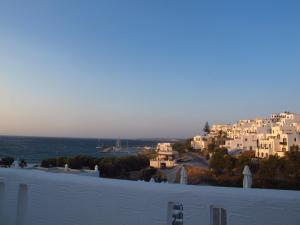 We didn’t venture out again but made ourselves at home, had a few drinks and dinner at the bar and chatted with Sakis the chef/caretaker and Stellios the bartender as well as a couple of Aussies from New South Wales. Oh yeah – took another thousand photos between us I think, it is just too stunning for words.

Someone’s sense of humour on Mykonos??

From our balcony on Paros

Maybe no-one is taking any notice but I seem to have my days out of whack somehow. I know that what I’m writing about today definitely happened on the 26th – not that I’m obsessing about it or anything, much.

Anyhow, after a few early mornings it was nice to have a sleep-in today, neither of us stirred until about 8:30. The buffet breakfast was astounding, it all looked delicious and the variety was huge. 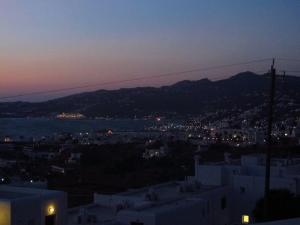 Twinkling lights of Mykonos by night

We had booked a cruise that left from Platis Gialos (i think) at twelve – missed the bus and all the cabs were busy!! The girls on reception were lovely and eventually got a cab for us but when we arrived at the beach we realized we’d left the cruise tickets back at the hotel. Neither of us had a clue what the tour operator’s name was or even the name of the boat. Eventually we found the right one, after a few offers from other tour operators, just in time though, think they were almost ready to leave without us.

There were only about a dozen people on the cruise but there were a few who were good people watching value, they gave the rest of us something in common to talk about if nothing else!!

One middle-aged Italian couple strutted around like they were god’s gift to everyone – he probably wasn’t just too bad but the woman was a real piece of work. Looked like she’d had lip fattening gone wrong and wore her bikini top with the neck strings tied around her body instead of around her neck so everyone was copping an eyeful of her nipples all day – not cool at all. Then there were a couple of guys who had eyes only for each other – they preened all day and I kid you not, if they rubbed sunscreen on each other once they must have done it ten times. 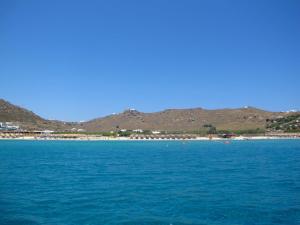 One of the quiet parts of Mykonos

The rest of the passengers were nice and fun to talk to, more Italians, some Brits and a couple of sisters who were Argentinian although one lives in London. We stopped a couple of times to swim, had a yummy bbq lunch and a couple of wines, saw quite a bit of the coastline of Mykonos and soaked up the beautiful weather.Even though it was after 5 when we docked it felt like we still had a whole day left to do more. We had a swim and sunbathe back at the hotel and had more treatments at the day-spa before we even went for dinner. The Thalasso Spa Centre is just gorgeous. During our stay we had pedicures, massages and enjoyed the Thalassotherapy pools. There are five pools in one big room, each pool is a different temperature and salinity and contains different minerals or oils. It was great, wonderfully relaxing.

The days are just so long, they never seem to end and it’s soooooooooooo much fun. 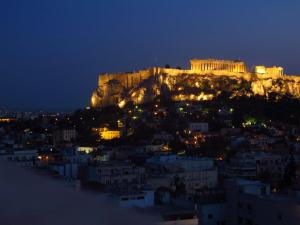 After our big day on the buses yesterday we headed back to the hotel worn out but happy, had quick showers and bolted to the top floor for a wine, nibbles and to watch the gorgeous sunset and the Acropolis come to life after dark. We honestly wouldn’t want to end our little visit to Athens any other way.We had an early start with a taxi ride to the port to catch the high-speed hydrofoil to Mykonos. The hydrofoils are huge and a real eye-opener if you’ve never been on them before. Our allocated seats were even in business class! We sat opposite a young couple from Brazil who were quite lovely so the (I think) 4 hour trip passed quickly. Sarah had the richest chocolate donut type pastry I’ve ever seen and then wondered why she didn’t feel well!! 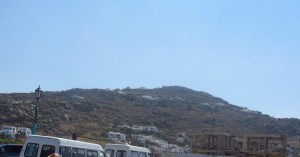 Arriving at Mykonos was a tad worrisome – the port area looked rather barren and deserted. As we met our driver who should come along too but the Brazilians and it turned out they’re staying at the Myconian K also. I couldn’t believe how much luggage the girl had, it was encouraging that ours weren’t the biggest or heaviest.We had a laugh about some of the vehicles there to collect their guests. Clambering into the back of tiny little 3 wheeler utes would be bad enough but I suspect that having twits like us taking photos and laughing would be even worse. Oh well, that’s the luck of the draw isn’t it?

Novel way to arrive at your hotel – Mykonos

Some of the buildings on the way were picture perfect and then we arrived at the hotel – it was just like another dream come true – all blue and white and gorgeous. It’s really just like the travel brochures and postcards and I love it.Our room wasn’t quite ready so we adjourned to the bar for a drink then headed to the day spa to organize a couple of pampering sessions and generally just took it easy.  Poor Sarah wasn’t feeling too well all day but she did venture to the restaurant with me for dinner, hopefully she’ll be back to her normal self in the morning. We’re only here for a few days so I’d say we’ll be rather busy!!