Last day in Antactica, Half Moon Is & Robert Pt

Oh no, last day in Antarctica before we head back across the Drake Passage to Ushuaia in Argentine, where did the time go?

The expedition staff were over the moon this morning to see “proper Antarctic weather’, overcast and -1 degree, and windy, for our last day. They didn’t want us to go away thinking it was always sunny, calm, and clear skies. 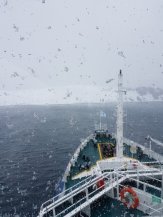 It’s snowing at Half Moon Is

Argentine base on Half Moon Is

Intrepid walkers on Half Moon Island

The fitness gurus in the group set off for a 10km run, the mountaineers started their trek and the other brave souls landed for more penguins and a walk. Me, I stayed on board and sketched, chatted and took photos from the bridge deck of snow falling! I spotted one of the zodiacs stopping and starting on the way back, eventually being towed back to Plancius by another. I took a couple of pics and decided to make a sketch. When Marijke looked through by sketchbook later she was so excited to see it there, as that was her zodiac that had been towed. The German friends were also super excited to take a pic as they were among the passengers! Again, the lost SD card has reared it’s ugliness – the pics of Marijke’s zodiac under tow were obviously on that camera, grrrrrr……….

Well, I won’t be sitting up here today!

Marijke’s broken down zodiac at Half Moon Is.

Half Moon Is. and zodiac being towed sketch

After lunch we headed to Robert Island for our last landing but the surf was too high for a landing, the bravest endured another zodiac cruise. Again, I was happy to stay on board to start another sketch, this time one I’d taken when kayaking. 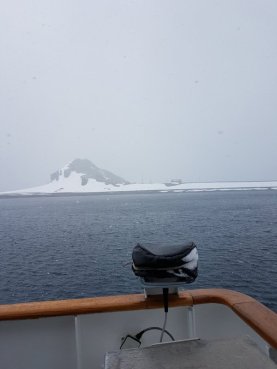 Apparently this is “typical Antarctic weather” 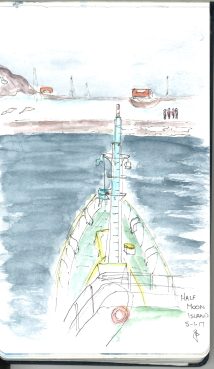 Rather wonky scaling on this sketch of Half Moon Is

And we’re off to Robert Island!

Waiting to see if we can land at Robert Pt 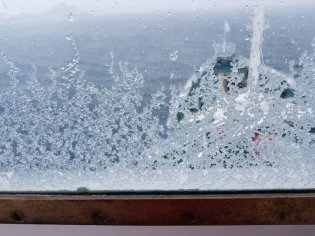 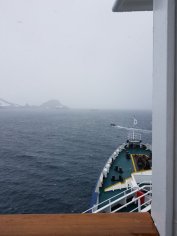 The zodiac going to check out conditions at Robert Island

Almost zero, and it’s in a protected spot, coldest day we’ve had. 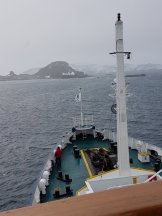 First stop today was a landing at Orne Harbour where we could see two bays at once from the top of the hill, purely exquisite scenery, I just hope I’m getting some decent photos as it’s truly unbelievable. I’m very happy to sit for ages and take it all in without snapping thousands of pics but it will be an added bonus if there’s even just one that truly shows what we saw.

View from my sketching spot at Orne Harbour

Orne Harbour sketch, perched on a rock halfway up the hill

Spent more time perched on a rock sketching and had a couple of penguins quite close who are just adorable. Another snow slide back down made for great entertainment and I videoed a few of the descents.

Yet again an amazing lunch, and it was off in the zodiacs for a cruise around Foyne Harbour with a few circles around the wreck of the Gouvernoren. This was a whaling ship that caught fire and was sunk to prevent the whale oil cargo from igniting and exploding. Once the fire was extinguished the cargo was rescued. The Gouvernoren is a big rusty hulk with just part of it rising out of the ocean quite near the shore, huge banks of pure white ice behind and blue skies overhead, just fantastic.

Near the Gouvernoren in Antarctica

Remnants of whaling boats near the Gouvernoren

The mountaineers in action! Near the Gouvernoren

We then motored further to a couple of old small wooden whaler’s boats on the shore that are well preserved due to the cold dry air. It’s so surprising that Antarctica is the driest continent but this is what helps preserve wooden structures down here.

Whale watching in a big boat will never be the same, we spent the next couple of hours following whales in the zodiac. Our group found a mother and baby to keep us happy. The baby whale was diving but not showing his tail and it seemed the mother was trying to teach him. Beau said usually when they show their tail and dive they won’t appear again for quite some time. This one kept diving, showing her tail and coming back up to repeat. Eventually, just as we had decided to stop following, we were cheering when they both dived and we saw 2 tails appear. How exciting!! Beau was also beside himself as the baby whale spy-hopped right at the front side of our zodiac. They poke their head out of the water, have a look around and then sink down again. What an afternoon. 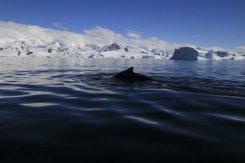 So close, think this was the baby 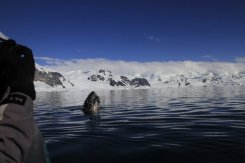 Our baby whale spy-hopping just in front of our zodiac! 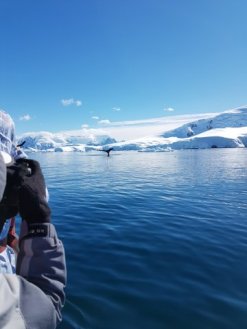 Whale flukes, this whale and her baby kept diving every couple of minutes

Marijke and a couple of the other zodiac drivers found a pod of whales and were included in their bubble net hunting circle. She showed us footage later and was just about jumping out of her skin with excitement. It all adds to our experience when the guides are just as, or even more excited than us, all the more so because they know some of these experiences are quite rare.

I think I got a touch of sun today – who’d have thought you could say that in Antarctica – and also not enough water, had a headache and very tired, so an early night; but not before another delicious meal and good conversation in the dining room with my table of German mates. A couple, Jorge and Kaisa and two of their friends Christiana and Barbara, we’ve had some great evenings together. 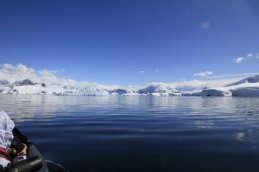 More of that shiny blue ice

And a penguin too……

Light through the ice

Loved this iceberg, looked like an Indian headdress to me

Near our landing spot at Orne Harbour

At the wreck of the Gouvernoren