Tag Archives: Half Moon Is

Last day in Antactica, Half Moon Is & Robert Pt

Oh no, last day in Antarctica before we head back across the Drake Passage to Ushuaia in Argentine, where did the time go? 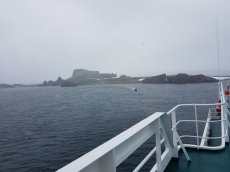 The expedition staff were over the moon this morning to see “proper Antarctic weather’, overcast and -1 degree, and windy, for our last day. They didn’t want us to go away thinking it was always sunny, calm, and clear skies.

It’s snowing at Half Moon Is

Argentine base on Half Moon Is

Intrepid walkers on Half Moon Island

The fitness gurus in the group set off for a 10km run, the mountaineers started their trek and the other brave souls landed for more penguins and a walk. Me, I stayed on board and sketched, chatted and took photos from the bridge deck of snow falling! I spotted one of the zodiacs stopping and starting on the way back, eventually being towed back to Plancius by another. I took a couple of pics and decided to make a sketch. When Marijke looked through by sketchbook later she was so excited to see it there, as that was her zodiac that had been towed. The German friends were also super excited to take a pic as they were among the passengers! Again, the lost SD card has reared it’s ugliness – the pics of Marijke’s zodiac under tow were obviously on that camera, grrrrrr………. 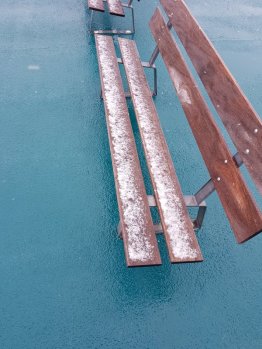 Well, I won’t be sitting up here today!

Marijke’s broken down zodiac at Half Moon Is.

Half Moon Is. and zodiac being towed sketch

After lunch we headed to Robert Island for our last landing but the surf was too high for a landing, the bravest endured another zodiac cruise. Again, I was happy to stay on board to start another sketch, this time one I’d taken when kayaking.

Apparently this is “typical Antarctic weather”

Rather wonky scaling on this sketch of Half Moon Is

And we’re off to Robert Island!

Waiting to see if we can land at Robert Pt

The zodiac going to check out conditions at Robert Island

Almost zero, and it’s in a protected spot, coldest day we’ve had. 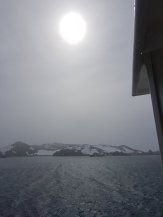