First up this morning was a visit to the Baracoa Museum – so interesting and so very different to most of our museums at home. Set almost on the waterfront and surrounded by stone walls with old cannon pointing out to sea it was originally part of the town fortifications, it’s in a stunning location and full of Cuban and more specifically Baracoan history. I was chuffed to find an opportunity to take the first of many Che Guevara related pics. 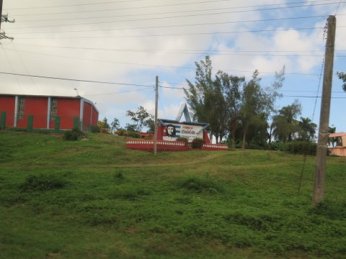 View from grounds of Baracoa Museo

We headed out of town to the Tey River for a boat ride and the highlight seemed to be the guy rowing had 6 fingers and toes on each hand and foot! He was an absolute hoot, lots of stories and oh so happy to pose for us. I felt sorry for him rowing the 5 of us along in the boiling sun but it didn’t seem to worry him, I’m guessing our tips make up for that. 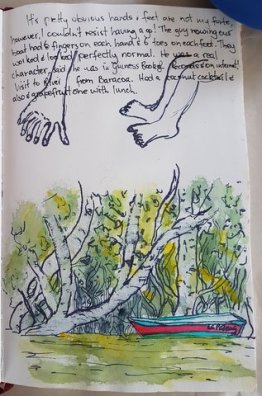 Other half of our group casting off!!!

Rowing on the Tey River Baracoa

Our lunch spot on the banks was just gorgeous, open sided buildings surrounded by the trees on a river bank, what more could you ask for. Oh, maybe a drink made in a coconut or grapefruit!!! I’ve not seen a bartender lop the top from a coconut with a machete before, but this one was very well practiced. He then emptied some of the coconut water, added white rum and juice and a straw made from thin bamboo and voila, I was set – could become very addictive. Buffet lunch with pork, rice and what I’m discovering is the normal salad of cucumber, tomato and cabbage along with the musicians all made for a nice although touristy outing.

Lunch spot on the river bank

My very special drink being produced!

Other half of our group casting off!!! 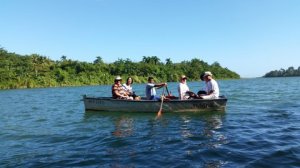 Rowing on the Tey River Baracoa 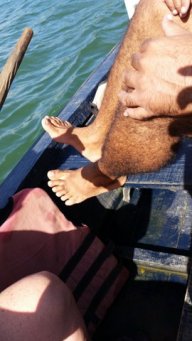 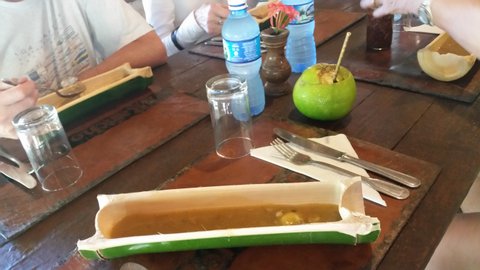 Ingenious use of bamboo and grapefruit at lunch

Back in Baracoa most of the group went back to the hotel but I stayed down with a few others for a wander. We talked our way into a ride round to a lovely beach in one of the taxis, a wagon with plank seats on each side pulled by a donkey and then back to the malecon. We joined the locals around a beer truck and bought a bottle to taste – one of the guys lent us his bottle, a plastic soft drink bottle cut down! Wendy also joined in the dancing with much egging on by us and the locals. What an absolutely wonderful experience, everywhere you go there is music playing and people just being together talking, laughing, singing and dancing.

Chris playing with the statue

And this is one of the butcher shops

Whatever was cooking here smelt wonderful

She must have tried the beer because she joined the dancing

Reminders of the revolution

Reminders of the revolution

Our taxi ride around town

Taking photos with this friendly guy

Looking back to Baracoa town from the beach

After lots more wandering we found a lovely place on the malecon with enough adirondack chairs out the front for all of us where we had a few drinks, chatted and watched the world go by. We met a German guy there with a beautiful big dog who splits his time between Munich and Baracoa – I don’t think you’d get 2 more different places in the world.

Our spot for the last of the afternoon in Baracoa 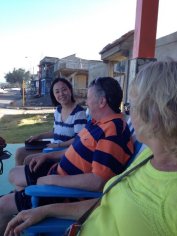 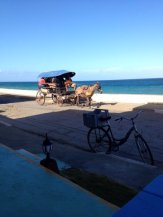 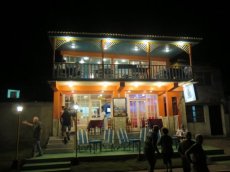 Such a pretty place right on the malecon in Baracoa

It was getting on by the time we made our way back up the hill where I sat in the garden and attempted a sketch before going to dinner. This was another private home with rooftop restaurant. This one was much slicker than last nights place, it was lovely, the food (lobster again) and service was great but I much preferred the more laid back quality of the first night. Tonight also reminded me of one of the joys of solo travel – not feeling stressed because of other people’s issues impacting the whole group. Things between one of the couples were tense to say the least!!! 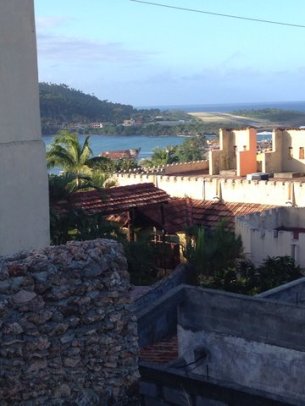 From hotel towards Baracoa airport

We had lobster done every way – Baracoa, Cuba

Another rooftop restaurant in Baracoa

Another rooftop restaurant in Baracoa