27-12-15
We didn’t have any stragglers on our 4:30 am start, the wake-up calls must have worked. As we were leaving so early the hotel provided us with a breakfast to go – a ham and cheese sandwich and poppa. Jenny accidentally sat on hers in the bus and caused huge hilarity and some really bad jokes. I think we were all laughing way too hard to stop from crying!

Habana airport in the dawn light

And here we are at Baracoa!

This time we went to the domestic terminal and, oh boy, was that a different story to the international one. All sorts of sights here and some badly smelling toilets too. Once again we were there about 3 hours early and this flight was also delayed, so maybe that’s normal over here. I’m not usually a whinger when I travel, I expect and accept that things are going to be different – but, really, I had the worst cup of coffee ever. Lesson learned – attempted cappuccino made with long life milk is never a good idea for me at 5 in the morning, lol.

Once we got going it was only about an hour to Baracoa, I was beginning to think we were in a sea plane when going in to land, the airstrip begins and ends in the ocean with both the approach and take-off over the sea, beautiful scenery but a tad daunting at first. It’s a really pretty airfield, surrounded by ocean, little rises and trees.

View to the airport from hotel

Looking down to Baracoa from the hotel

After a bit of a drive around the town then a half hour or so walk it was straight out to a cocoa farm a short way out of town. Baracoa is the biggest producer of cocoa and chocolate in Cuba and on the way we passed the chocolate factory opened in 1963 by Che Guevara, sadly, the factory is closed these days. 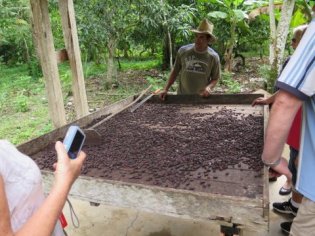 The cocoa farm tour was interesting, had a taste of cocoa fruit, saw the processes and scribbled this recipe for making chocolate – 3 teaspoons cocoa powder, 2 glass water, 1 glass milk. The very first of our group lunches was at the farm, lots of rice, black beans, plantains and chicken. Three local musicians serenaded us, they were fabulous and a few of the braver souls in our group joined them. Then the CDs came out for sale as well, loved the music but didn’t buy one – I’m pretty sure there’ll be other opportunities.

Hahaha, we got to walk off our lunch with a climb up a darn big hill to our hotel! The room’s very old and worn but the air con worked so I didn’t mind, had a little nanna nap before heading back down to the town for dinner. Seems there’s quite a common practice of opening a restaurant on the roof of your home, this one was fabulous. The owners were so happy and friendly, the seafood was amazing – whole lobster; dinner was 20 CUC (equivalent to about 20 euros) with 2 drinks included. The musicians this time were a couple of guys who kept making eyes at all the females – funny as…. again we had a ball – except for the uphill climb home, lol. 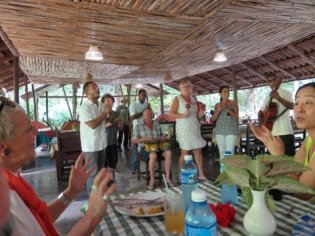 First lunch on tour and the ever present serenading begins

Dinner at the rooftop restaurant

Our hotel on the hill

Dinner on the roof