Sometimes this being high tech just doesn’t pay off, I booked a bus and boat tour to the Forth of Fife online and kept a copy of the confirmation on my phone and ipad – no room for a printer in the backpack. You can fly all over the place without a printed ticket but  the ticket booth attendant where all the tourist buses pick up HAD to have a piece of paper before they would give me my ticket. The fact that they could plainly see my confirmation meant nothing – without it printed out they weren’t going to do anything.

Thank goodness again for my  need to arrive with miles of time to spare. The ticket guy told me about a place where I could print an email, so off I went at a million miles an hour. Got there and asked, no, they don’t have anywhere to print it, but she pointed me up the hill a couple of blocks to another place where she thought they would be able to do it. Another heart attack inducing sprint later I got the same answer – this was not looking good! But then another guy at this place poked his head around the corner and said he was pretty sure a cafe just another half a block further up had an internet cafe upstairs. By this time I was almost ready to give up and just go buy another ticket but I figured I still had time so I’d give it a go – yay, third time lucky!! A couple of pounds later and I was set – and my return trip back to the ticket booth was downhill!! 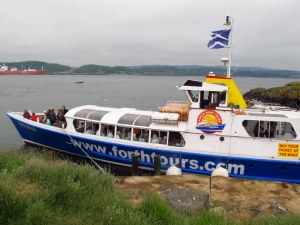 Whew, got back with about 5 minutes to spare! Then it was a nice half hour ride down to the bridge with commentary along the way. There didn’t seem to be that many people on the bus for the size of the boat but another bus arrived and all these little old ladies started pouring out, chattering away in the most gorgeous Scottish accents, the boat was certainly full once they all boarded. I perched on the end of one of their seats and ended up having a wonderful chat with some of them, then ran up and down the stairs getting brochures for one of them, then another two, then another eight – because, of course, they all wanted one each to take home!! They were really lovely though and kept passing everything I said down the line like Chinese whispers – “she’s Australian, you know”, “travelling on her own, you know”, “ooooh, very brave lass isn’t she”!! 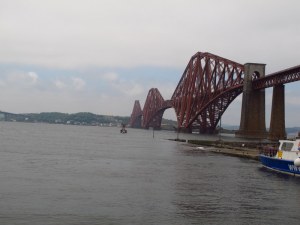 Forth of Fife rail bridge, Scotland

The gorgeous rail bridge was the main thing I wanted to see. I hadn’t even heard of it until we drove into Edinburgh the other day, but it’s an amazing structure, built way back in 1890 and still going strong.

I also took the opportunity to spend some time on Inchcolm Island, it’s in the middle of the harbour and has ruins of an old abbey as well as some WW2 remnants to explore. The boat lets you off and you catch the next one going back an hour or two later. I asked one of the island staff if it was okay to head up the hill to some of the WW” bunkers because there seemed to be an awful lot of seagulls flying around. She said I’d be fine so long as I stuck to the mowed path – that should have been warning enough, really, I should have read more into those words than what she said.

I headed off (along the mowed path) and not too long later seagulls started squawking and flying around but I thought they’d get used to me. Then a bit further on, I got my first seagull poo down the front of my coat, but I thought, okay, that’s a bit of bad luck, I’ll put my hood up and kept going. Then they started dive bombing me, so I put my bag on top of my head and went a bit further. But they weren’t giving in, and I didn’t know what to do, I must have looked an absolute dill, with my bag on top of my head, doing circles, trying to decide whether to keep going or give in and go back. I gave in and started back down the way I’d come, yelling at them like a bloody loony tune. I honestly thought they wouldn’t keep it up but they got worse and by the time I got away from them my coat and bag were absolutely covered in seagull poo.

So, back to the island staff office to try and clean up – guess what, they have no running water. They gave me a bucket, a couple of bottles of water and some disinfectant wipe things and left me to it. Oh my god, have you ever smelt seagull poo – it pongs. I wouldn’t have worried so much about cleaning my coat then and there except I really needed to wear it as it was freezing, and also because it smelt so bad. I kept finding new bits everywhere I looked, down the back of my jeans, on my joggers – but I was so relieved to have had the hood, none on my hair, that really would have been the pits.

That little episode put paid to my plan of spending some quiet time sketching the abbey ruins, although I still had time for a good look around them. The boat trip back was much quieter without the dear old ladies for company, just a few seals and puffins as well as the bridges to admire.

Even though seagulls have slipped even further on my list of bird I like, sometime you can be lucky – this is only, I think, the third time I’ve had access to a washing machine where I’ve stayed – so coat, bag, jeans and joggers all went in together for a good clean. Lesson learnt for today – don’t trust bloody seagulls, EVER.

Look what I found in Edinburgh! 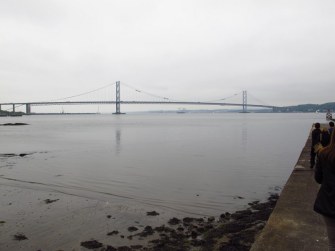 Forth of Fife road bridge

From the abbey ruins on Inchcolm Island, Scotland

On the way to Fife, Scotland

Tagged as Forth of Fife, Inchcolm, Seagulls