On the tall ship at Glasgow Riverside Museum

Feeling very brave today, I tackled getting to the Riverside Museum via public transport. Glasgow has a little subway system consisting of just two circular lines, the inner and outer lines. I have been using this great system for the last few days but today I tried the buses out as well. My plans went slightly astray when one of the bus drivers told me the Riverside Museum bus I wanted to catch didn’t run anymore – I later found out it does still run, but anyway, it just meant I had a longer walk than I anticipated. The Riverside Museum is quite a way from anything else, sort of stuck in the middle of nowhere with not much around it. So, when I saw other people heading in my  direction I kind of stalked them for a while, but also was following my map, just in case – and we all arrived in no time!

Glasgow would have to be one of the most budget friendly places for visiting museums, this one was free entry also – and absolutely full of families. The main museum is chock a block full of every conceivable means of transport, and a tall ship that was built in the Clyde, is permanently moored outside. The fact that you can climb all over a large number of the exhibits really makes it popular with the dads and kids, I saw lots of mums standing by looking just a tad bemused; and had a little chuckle to myself a few times, thinking, hehehe, I can leave any time I want!!

I found the bus stop and had a much quicker trip back to the city, thank goodness, because it had turned really cold and wet by the time I left. Glasgow rain is not at all like the rain I encountered in Ireland. You could walk around in the misty Irish rain for hours and hardly get wet, but this stuff was like ours a home – really heavy and wet you through. 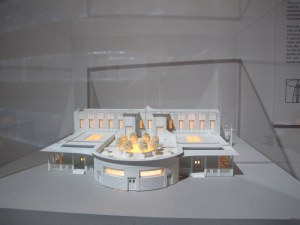 CRM model at The Lighthouse, Glasgow

More Charles Rennie Mackintosh in the afternoon, this time at The Lighthouse Centre for Design and Architecture. Mackintosh originally designed the building for the Glasgow Herald Newspaper, so the architecture has his imprint all over and several floors inside are dedicated to his work.

More quiet time at the botanic gardens produced another sort of acceptable sketch later in the day. I even had a walk through the big round glasshouse instead of just looking at it from the outside – more “firsts” since I left home than you can poke a stick at!!

on the way to the Riverside Museum, Glasgow

Real cars on the wall at Riverside Museum Glasgow

Part of a MASSIVE loco at Riverside Museum Glasgow 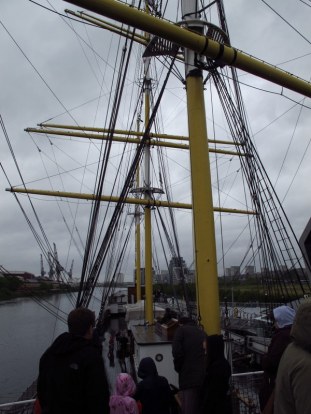 On the tall ship at Glasgow Riverside Museum

Strange signage on the car at the Riverside Museum Glasgow

Staircase at The Lighthouse, Glasgow 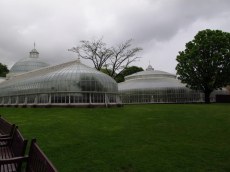 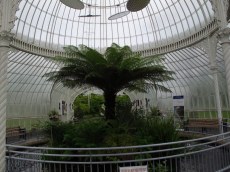 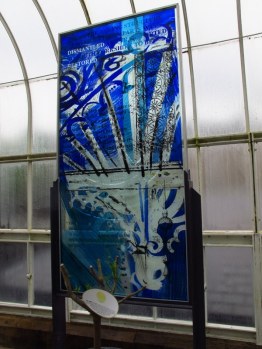 Cool infographics in the greenhouse at Botanic Gardens Glasgow