My favourite parts of Brighton

I loved the Brighton pier, except for the cheeky hot-dog thieving seagulls, that is. I’m pretty sure most of the fascination comes from it being so very different to what I’m used to, guess that’s probably true for most things – they say, familiarity breeds contempt, don’t they.

Anyhow, it’s rather tacky and trashy, the greasy fish and chips, the huge hall full of arcade games and the show ride parts, but it still has that old world romantic air about it for me. I can just see the crowds from the late 1800’s promenading in their long dresses and teeny tiny parasols or the flappers of the 1920’s with their short hair and oh so confident aura, wandering along, smoking and laughing – can you imagine?

Also, the beachfront, it’s quite a way below the road and there’s little shops built into the cliffface? under the road – I didn’t shop (no room), just thought they were cute!! There’s beach volleyball and basketball courts and table tennis tables – all of them being used; and of course any number of cafes and pubs, just for something different! I sat in a sunny spot out of the wind to do some sketching and people-watching. It reminds me a bit of Victoria at home, where people seem to go out to do things more than we do in Queensland, or at least country Queensland. It was really cool to see how people just rocked up at the table tennis tables with their paddles and ball and just played whoever was there. As I left they were that many of them there they started to organize themselves so no-one got left out – there were fair dinkum about 15 of them and it was obvious each person only knew 1 or 2 of the others. Can’t imagine that happening at home..

The old West Pier, or, I should say, the idea of the old West Pier, because it’s no longer really there, except for a mess of steel a little way off the beach and some remnants stacked under what is left of the beach end. I’d love to have seen it in it’s hey-day or even 10 or 11 years ago before it finally succumbed to fire and the sea.

The fact I didn’t feel conspicuous. I know, I know, that has much more to do with me than anyone else or where I am. But honestly, I didn’t feel like people were judging what I looked like or what I was wearing – and no, I’m not 10″ tall or 200kg, but probably just too self-concious for my own good. Maybe the product of our culture where you think you should conform to some crazy unreal expectation. Anyhow, Brighton has a reputation for being “out there” and has a large gay presence so maybe they are used to being judged so are not as judgemental as some.

Enough of the deep and meaningful, hope you enjoy the pics as much as I enjoyed taking them. 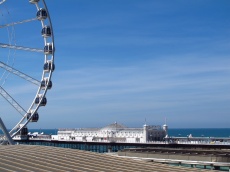 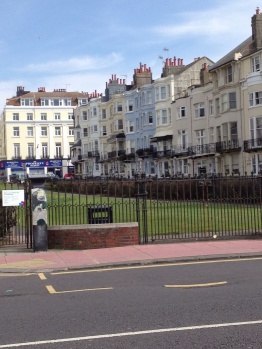 My ‘hood while in Brighton

Sad end for a piece of Brighton’s history 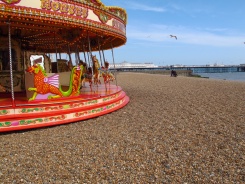 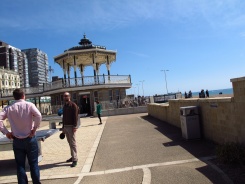 Under the road, Brighton Beach, England 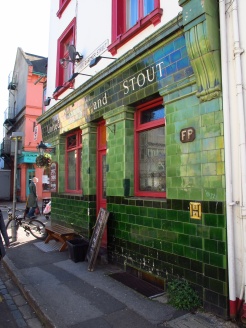 Police ready for trouble during a facist march, Brighton England

Shops on the beach, Brighton, England