Cruising down the Avon

I just keep ending up back here!!

Last full day in Bath today and I keep finding new places to see and things to do. I feel a bit like a stalker sometimes, I seem to end up in the same places about four times every day. I’m pretty sure I don’t really go in circles because I keep seeing new things but I must just go back to where I started or something!! Maybe I’ve just got a goldfish 3 second memory – oh, look there’s something new, and again, and again – nah, just joking.

Had a look through the Guildhall Markets, there’s a book stall in there that would make a library proud, except you could make a complete mess just by taking one book from the bottom of a couple of stacks. They have books stacked about 6′ high! There’s also a ribbon and button stall with more buttons than you can poke a stick at – thousands, I say, thousands!

The Victoria Art Gallery was a bit different, it had lovely big couches in the middle of some of the rooms. The contents were pretty good too – it wasn’t just all about sitting around doing nothing. The glass collection was fantastic, I’m always a fan of coloured glass or all sorts, some of the bottles were just gorgeous. 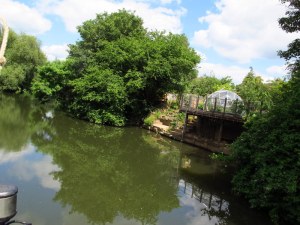 Cruising along the Avon from Bath

A cruise down the River Avon was a lovely little break away from museums and art galleries. There’s not really that much to see but it was nice just cruising along peeking in people’s back yards. There’s another weir at Bathampton where the boat turns around to go back to Bath.

The captain told the same story about why there are so many ‘River Avon’s’ in England as the guy from my Hadrian’s Wall tour. The Romans kept asking what the rivers were called and the Celts kept telling them ‘Avon’ meaning river. The Romans thought they meant that was the name of the river – so they called them ‘River Avon’. So really they were calling them River River, heeheehee. Doesn’t take much to amuse me at times does it?

I haven’t been very adventurous with dinners in Bath, I found a great place at the uni to eat; so back there again tonight, to sample something different off their menu, before tackling more navigational challenges tomorrow.Stalk 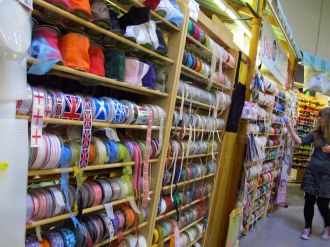 Ribbons by the mile

Chains and necklaces too 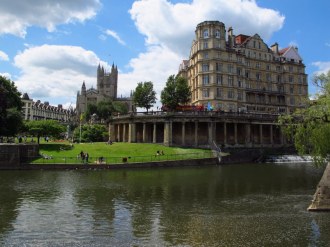 How cool are the reflections

There’s a crown on top of the Victoria Art Gallery building!

Love the shape of the weir

What’s at the bottom of the garden

Cruising along the Avon from Bath 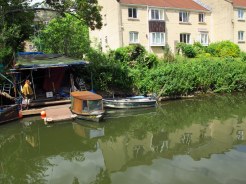 Pultney Bridge from the not-so-flash side