Last day driving and getting out of Belfast

There were only two of us for the walking tour around the Titanic site this morning, a young Austrian, Julia and myself, an Australian, Julie – coincidence huh?. I wouldn’t be surprised if the guide was trying to get us to quit, she asked us about three times if we were sure we wanted to continue and be wet through by the time we finished an hour later. It was fairly miserable, cold, windy and wet, but she wasn’t getting rid of either of us that easily. This is when I actually got to see the drawing offices, they’ve been empty for more than 20 years now apparently. It’s quite sad to hear about the glory days of places like this and then see them lying idle and deserted. The tour was totally captivating, well worth the £9 fee – and it only drizzled a little!!

I felt bad not having seen anything of Belfast so caught the hop on hop off bus and did a circuit before I left – and learnt more about the troubles in Northern Ireland in that hour than I’ve ever known before. Once again my lack of knowledge left me feeling rather ignorant – I had never known what the fighting and fuss was all about, or even who was fighting for what. I also learnt that the Peace Walls in Belfast have stood longer than the Berlin Wall, and judging by current events, they won’t be coming down any time in the near future either.

It was all very well choosing somewhere to stay based on the ease of navigating my way there, but I didn’t give a thought to finding my way back out again, so when I got in the car to head off and realized this fact, I just about lost the plot. You know the classic scene where someone is banging their head on the steering wheel and wailing about some major catastrophe? Well, I was just about there – but, instead I just drove off and hoped for the best – oh, I also kept my eyes peeled for signs too. You wouldn’t believe it, but, I soon found signs that actually read, “THE SOUTH” and “THE WEST” – wootwoot!! 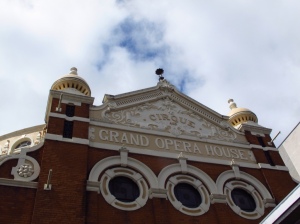 Who’d have thought driving from Belfast to Rosslare would take so long, it doesn’t look far on the map but took me four or five hours – huge drive over here! I’m so pleased to be car-less when I go back to Dublin, it was bad enough trying to bypass it let alone drive through it. I did my normal trick when I got to the little village of Tagoat near Rosslare, had to ask where the B&B was; the old guy at the pub came outside with me and pointed back the way I had come and across the road, on the side of the hill was Coral Gables B&B – in plain sight if you were coming from the ferry, not so much from the way I’d come. Well, that’s my story, anyway, hahehehe. I was the only guest there that night so took myself out to the lounge and had a fine old time cutting up brochures and sticking bits and pieces in my journal – you couldn’t really call it scrapbooking but it’s the closest thing I’ve got at the moment.

No mans land in Belfast 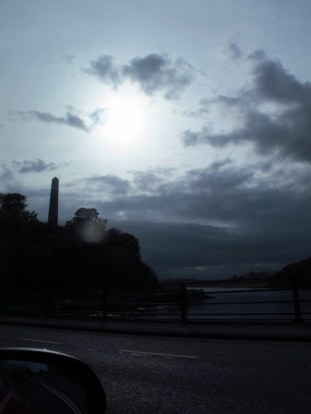 One of my last drive-by shootings

Interesting bridge on the way south

The main roads are so wide, you can almost overtake without going in other lane 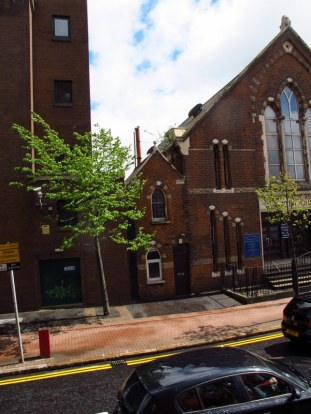 Smalled house in the city?

One of the many political murals around Belfast 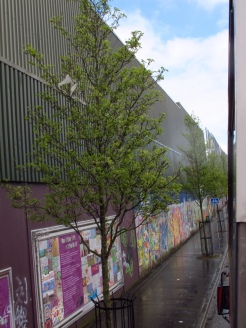 Part of the Peace Walls in Belfast, they have stood longer than the Berlin Wall 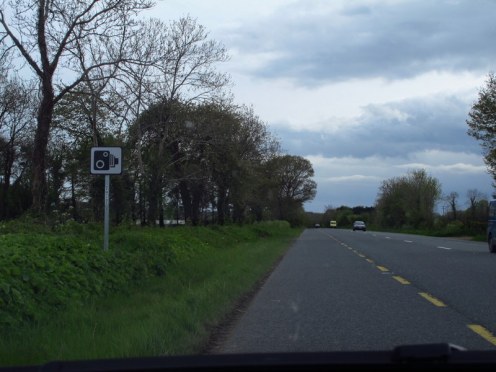 Thought these signs were for a photo op – turns out they’re speed camera signs, ooops!!