Back to normal this morning, less the welcome/dreaded patch. Beautiful calm ocean, snow covered hills, and blue, blue sky as well as whales blowing quite near the ship, and even penguins on ice bergs greeted us this morning in Antarctica – and it’s New Years Eve.

After breakfast I watched the zodiacs being unloaded for the first time and finally I was heading down the steps of the loading dock for my first ride, to land at Cuverville Island where I immediately sank to my knees in snow and ice, heaps of fun. I gave the snowshoeing a miss to just hang with the penguins on the shore and try my first sketch in Antarctica.

First go with soluble ink was really quite a failure but I had another go back on Plancius which turned out better. The penguins were mostly Gentoos but there was one lone Chinstrap among them looking rather out of place.

On the way back I saw my first seals sunbaking on iceberg – what a blast. The only times I’ve seen seals before have been in their dozens, laying on rocks, smelling to high heaven, I already have a new appreciation for these funny creatures. I also had my first good view of Plancius from a distance, I think she’s a lovely looking ship.

Woohoo, back for a lovely lunch while Plancius motored along to our next stop at Danco Island and my chance to go kayaking in Antarctica. Off to the boot room again, this time to collect a wetsuit, booties, different lifejacket and my “skirt”. Louise takes one look at each person and grabs what seems like a random wetsuite and lifejacket, but is always the right size, then sends us over to the booties to pick our own, next we grab the skirt and get instructions on what to put on and in what order. Good grief, I’m getting old, it all goes in one ear and out the other but finally I get it – I think. Thermals, socks, wetsuit, booties, outer jacket, skirt, lifejacket and finally gloves and beanie, at least I think that’s how it went. Then the trek along the corridors, down to Deck 2 and back up to Deck 3 to get out to the kayak loading deck. By the time I got kitted up I was boiling and pleased to be out the back in the fresh air again. Louise organized us in helping to lower the kayaks to the water to be strung out behind our zodiac, another steep learning curve. Then back the way we had just come to the zodiac loading deck and off we went. I don’t know how I didn’t take a photo of someone in this gear, but I don’t think I’ll easily forget the images.

Couple of kayakers leaving the safety of the zodiac!

Lousie in her blue kayak

Better paddlers than my partner and I

A short ride in the zodiac to find a good spot and it was time to move, oh so elegantly, to the kayaks! Two at a time we made our way in and away from the safety of the zodiac to practice our paddling and steering skills, some of us better than others. My kayak partner and I were in the latter group, both of us raw beginners and I know I was terrified of tipping over and having to find the quick release handle to let my skirt go of the kayak and surface in under 20 seconds. Once again one of our fearless expedition guides had done a good job of scaring me witless of what could happen if something went wrong, lol.

I was partnered with an older Portuguese gent who didn’t seem to have much English and had elected to be in the front. Communication wasn’t high on the agenda, with us both concentrating hard on trying to go in the direction required and not keep doing circle work, hilarious again. I always thought the idea was to do a stroke on each side but old mate in front was making it up as we went along and I had no hope of copying, so was always sort of 1 or 2 strokes behind on the wrong side.

What an experience, kayaking in the Antarctic

Elmo following us in the zodiac

I finally worked out if we ended up going to far off course one way I’d put the opposite paddle on the water and magically we’d turn back the other way. Seems he found out too so we zigzagged our way behind Louise and the others hunting for whales just beyond every iceberg in the darn Antarctic. The bridge were advising Louise of whale movements and we covered an awesome amount of ground, or more correctly, water, but didn’t catch up with them. To see whales that close would have been amazing but I thoroughly enjoyed just being in a kayak in Antarctica.

Back in the zodiac after kayaking

About 2 hours in, one other kayak wanted to call it quits and my partner had the same idea, so our next elegant movements took place – removing ourselves from kayak to zodiac. Talk about looking like beached whales, all 4 of us were stiff as boards with arms that just wouldn’t lift us out as we performed this feat. Without the help of our zodiac driver, Elmo, and one of the other kayakers we’d never have made it, not my proudest moment, that’s for sure. I’d love to do it again but maybe some practice first would be advisable!!

Another nap after all that exertion meant I was ready for the long night ahead. During dinner we had a pod of about 20 orca whales join us for a while. We waved the first group of campers off after dinner and then hung around in the lounge to see the New Year in later.

Plancius expedition staff partied with us, music and dancing were entertaining, and we enjoyed more complementary Proseco at midnight, provided in glasses engraved for the occasion that we were invited to keep.

Best way I’ve seen in the New Year? In Antarctica, on the Plancius, in daylight, with many happy friendly people. That will certainly take some beating.

Lowering zodiacs to the water

One lonely zodiac in all that vastness 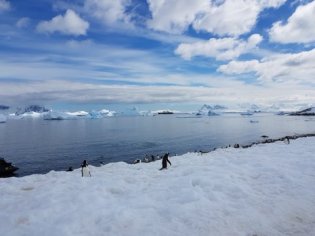 And yet more colourful ice 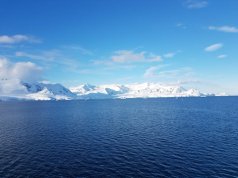 Blue seas as far as you can see

Kayaking around Danco Is.

Elmo following us in the zodiac

from the zocdiac after kayaking 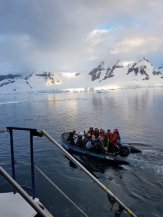 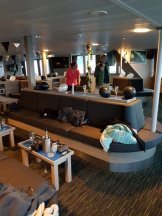 The lounge on New Year’s Eve, most people must have been near the bar!

What a view on New Year’s Eve