Back to the tower

I called in to the tourist office during my second week in Paris to ask about booking a ticket to go up the Eiffel Tower; the guy I was speaking to actually laughed in my face when I said I wanted it for during the next week. I couldn’t believe how rude he was – “don’t you know Paris is the most visited city in the world, and the Eiffel Tower is the most visited monument in Paris? You have to book months ahead”. So, instead of buying multiple tickets from them I just left with a smile and a “merci”, all the while muttering under my breath about typical bloody Parisians. WELL, I went online and bought a ticket to go up the Eiffel Tower for 3 or 4 days ahead, no trouble at all – and without any snooty attitude, too. So today it’s Centre Pompidou in the morning and Eiffel Tower ride in the afternoon. 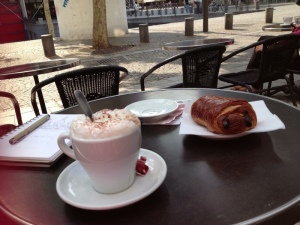 brekky while waiting for the centre pompidou to open

Surprisingly, I was too early at the Pompidou, I’m not usually one to arrive before the museums open; must be the excitement of going up the tower later. There’s never a shortage of people to watch over here so I sat and had the yummiest coffee and chocolate croissant for breakfast and took in all the activity around. A woman in long lacy skirts and woolen coat with a couple of wicker baskets floated past the coffee shop a couple of times. After a while she plonked herself down in the middle of the huge cement area in front of the Pompidou, set about unpacking her baskets and began making beaded jewellery – she was still there four hours later when I came out, woolen coat and all in the boiling heat.

Lichtenstein at the Centre Pompidou

The Centre Pompidou houses the modern art gallery among other things and the building is so not Paris, but totally suits its role. The air conditioning barrels and I don’t know what else are on the outside of the building, it’s brightly coloured and very modern looking. I just loved the Roy Lichtenstein exhibition, and was happy when I found plenty of biographical info to read along the way as well as marveling at his style. I did my usual backtracking a few times through the center, I always feel like if I go too slowly to start with I won’t get to see it all, so I wander back and forth all over the place. I think I say this every time I see another modern art gallery, but, this one is really something wonderful.

One of the things I’ve noticed about myself is when I’m on a good thing I stick to it, I’ve mastered trains and subways and rarely venture on to buses. So with that in mind I decided to catch a bus to the Eiffel Tower. I wandered back towards the city and caught the right bus. Everything was going fine until we turned up a street with a truck blocking the way, nothing unusual there, it often happens, but they mostly move on quickly. Not this time, without a word of a lie, it was at least 15 minutes before word filtered to the bus driver that the truck had broken down and we wouldn’t be going anywhere in the foreseeable future. You can imagine what had been going on until then, all this french being thrown around, lots of hand waving and shouting, then it just went quiet and everyone got off the bus and walked away. Bloody hell, I had no idea where I was and my ticket for the tower was for about half an hours time – see what happens when you don’t stick to what you know!!

Best I could do, I figured, was head back towards where I reckoned the river was and go from there. That seemed to be okay but after about ten minutes I decided I wasn’t going to make it in time by walking so hailed a taxi; thank goodness I did because it was still miles away even then. Times like these are when I wish I had better phone service/data plan or something, half the time when I need directions I don’t seem to be able to get service, grrrrrrr. But………….. I got there in time, took miles more photos, pinched myself again and went to the supposed quick line for those with tickets, and waited, and waited and bloody waited. Again word filtered through – they were evacuating all the levels of the tower and not letting anyone else up, no idea why though. You wouldn’t read about it would you? Finally, an hour and a half after my allotted time they started taking people up again. Apparently, (not sure how true it was) a backpack had been found up top which caused a bomb alert, everyone had to be taken down, bomb squad went up – just someones backpack left accidentally, no bomb, grrrrrrr again!

It was all worth it though and wouldn’t have missed it for quids. I liked the fact that you’re not herded up and back with no time to just enjoy, you can stay pretty much as long as you like. I took plenty of time and had a chocolate crêpe at the place near the carousel before I left – more calories than I like to think about, but, oh so yummy.

Not content with my day so far I then wandered pretty much aimlessly over the other side of the river until my feet started protesting too much and I found a metro to take me home. To cap off an eventful day I had the loveliest chat with a woman at ‘my’ bar near the apartment. She grew up in the 19th arrondissement but has lived away for years and was just home for a visit. She had about as much English as I had French, but we chatted for ages with lots of sign language,laughter and a couple of wines – meeting people like that has got to be one of the best parts of travelling. 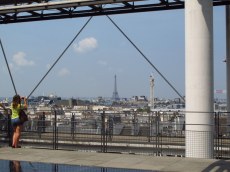 Paris from the Centre Pompidou 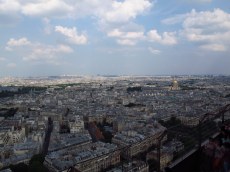 from the eiffel tower paris 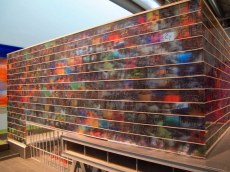 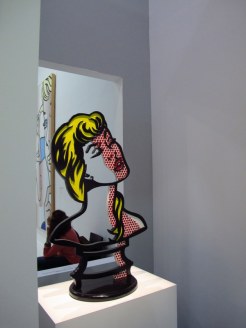 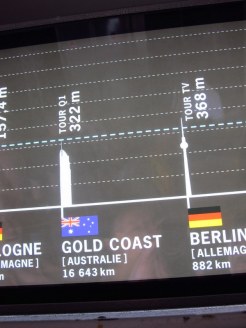 closest I could find to home from the eiffel tower 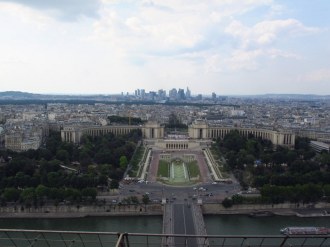 paris from the tower

Selfie on the Eiffel Tower

yet another pic of the eiffel tower

going down the eiffel tower paris

carousel near the eiffel tower 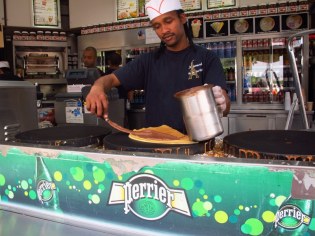 crepes at the eiffel tower

3 responses to “Back to the tower”