Starting to look around Paris

I’ve had so many ‘pinch me’ moments since I started this trip and my daily commute to school was right up there some days. Catching the yellow line of the Paris metro from my station of Reuilly-Diderot, going past places with names like Gare de Lyon, Bastille, Musee de Louvre, then emerging at Tuileries to the sight of a bank of typically French buildings on one side and the Jardin de Tuileries on the other was part of my dream come true. I know the metro is not exactly tourist fodder but the fact that it was my daily routine helped me feel I was actually living in Paris and not just visiting for a few days.

The school organises outings most afternoons and on Tuesday we caught the metro en masse to the Hotel de Ville – or actually we tried to but ended up getting split into three groups with most of us not even knowing where we were heading. One group caught the metro and went straight there, another group, of course I had to be in this one, got spooked along the way because our guide, Robin, had gone missing so we got off a couple of stations along, and the last group, with our guide, were on the train, then got off again because someone was missing. Thank goodness we spent a few minutes trying to work out what to do and when the next train came along we spotted Robin inside so on we rushed and didn’t let him out of our sight again all afternoon!! I’m sure he was wondering why we were hanging so close, but at least we didn’t get lost. 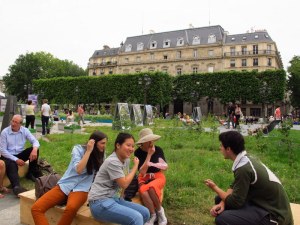 Sitting among the wildflowers near Hotel de Ville

The area in front of the Hotel de Ville was full of little gardens of wild flowers and sun loungers, part of some special exhibition and so unexpected in the centre of Paris, just gorgeous. Only a few minutes walk later and we were in front of the Notre Dame, I couldn’t believe it! Those of us new to Paris did the obligatory oohs and aahs and took miles of photos. I was quite surprised that the sixteen year olds were as interested and awe-struck as I was, but there you go, some things transcend age don’t they. We made our way back to the River Seine and the Ponte Neuf via a few other amazing but not quite so famous buildings.

Then, bloody hell, he left us to make our own way home!! I got home with no worries but poor Deb got side-tracked shopping and ended up miles and miles from where she thought she was. Luckily though, the woman she asked for directions was really helpful, even going with her to the metro to make sure she got on the right train.

Wildflowers in the middle of Paris

Nicole, Deb and I

Riding in style and the grandstand at Notre Dame

Busking on the bridge

4 responses to “Starting to look around Paris”