Derry and the crazy drunk guy

After driving over the same bridge and back three times, I stopped and worked out from google maps that I had come in the opposite side of the river to what  I thought! Fuck, I’m sick of trying to navigate without maps of towns or a GPS!!!! Sorry, but it is soooooo frustrating and then when I did find the correct street name I couldn’t find the actual place. So, one frantic sounding phone call to the owner, and she said she’d be with me in a few minutes. You wouldn’t believe it but I was actually less than 10 meters from the place and didn’t know it. Turns out she was having bathroom troubles so I stayed in her sisters B&B next door! Oh, by the way, I’m in Londonderry, or Derry, as it’s often called by those who live here.

Cannon along the Walls of Derry, Londonderry

Went for a walk along the top of the old walls of Derry for a bit then called in to a pub recommended by the B&B owner and listened to some great Irish music for a while before heading back to catch up on some journaling. I even spent some time sketching the band, and then regretted it, because after a while I realized they were looking at me strangely – my habit of checking what I’m drawing every few seconds must have looked pretty strange. Or maybe they thought I was just having a good perve!!

I’d not long dropped off to sleep than I woke up to some guy knocking on the front door of the B&B, calling out to Mick to let him in. He just kept knocking and yelling, then he started banging and swearing, I was a bit scared because the owners weren’t on-site and I didn’t know how many other people were there. Then I heard someone talking to him but he just kept yelling. All I could think was, oh crap, everyone at home will say I shouldn’t have come to Northern Ireland and I haven’t seen Europe yet! A while later I heard some other people come along and they, along with the drunk guy, came inside and stumbled upstairs – I dead set had my head under the blankets but straining to hear what was happening. Then, such an anticlimax, they must have gone to their rooms, doors banged and peace descended!

If I’d been a bit braver I would have banged a few doors myself in the morning to wake them all, but thought better of it. So, the big topic at breakfast amongst the oldies (and I’m including myself here), was the nocturnal happenings – and none of us were any the wiser when I left than we’d been last night. But it just goes to show I guess that staying in reputable places and areas is not necessarily going to keep the crazies or drunks away.

I just realized, I was so peeved about my navigation problems when I started writing this that I haven’t said anything about my day before then. A few people have told me that Donegal is a lovely place, so I made sure to go through there today. I didn’t have a very good look around, (it was raining again), but I did pay to go through the Donegal Castle. Parts of it were kind of cute but some parts looked out of character, like they were too new or something. Not that I particularly cared, I was out of the car and out of the rain – what more could I ask for.

It was Mother’s Day at home today so I decided to treat myself to lunch at a gorgeous old fashioned restaurant in the centre of the town; The Market House  Restaurant at the Abbey Hotel. I’d have to say, it was one of the best meals I’ve had for ages, roast with all the trimmings – even a Yorkshire pudding. and a huge selection of desserts to choose from afterwards.

Sometime during the day I had spotted another great ruin in the middle of a paddock, and couldn’t resist doing a U-turn to try and get a photo – I ended up having to do three u-turns, park up a side track and run across a busy highway – but I got the photos. Sometimes, when I look at them later, I think no-one will believe the colours are really that vivid, but the greens are truly so, so bright.

Derry from the walls

interesting – houses all the same

Ruins in the paddock

Ooooh, interesting, got to get a closer look 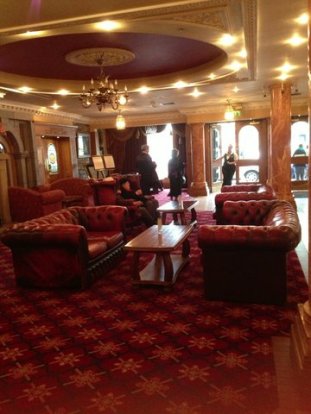 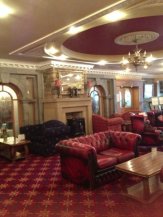 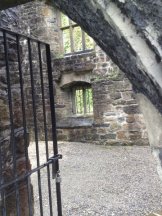 Donegal from the castle