I’m off to see the islands, the wonderful islands of Greece!!

I said good-bye to Italy today, hopefully not for good but just for a while and started another leg of my journey, to Athens this time. I got myself to the airport, through check-in and immigration and boarded the plane without any dramas. There were just a few butterflies worrying whether I would know where to go and what to do but it was quite easy really. 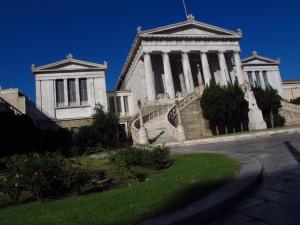 Can you tell I’m in Greece?

I had originally planned to leave Rome a couple of days ago but changed my plans so had contacted the travel company and changed the day of my airport to city transfer in Athens to today. As luck would have it my daughter, Sarah, arrived at the airport about 40 minutes before me and not knowing I had changed plans she convinced the driver he was only collecting one person not two as he thought- so she took my car!!!

I must have spent 20 minutes reading  and re-reading the transfer drivers signs hoping to find the one with my name, it didn’t matter how many times I looked none of them magically changed. I still had the Italian sim in my phone so couldn’t use that and couldn’t find anywhere to buy a Greek one either. I found a place to make phone calls but the travel company didn’t answer and neither did Sarah. They really were minor problems but I was wandering around the airport like a lost sheep for a while. Eventually common sense kicked in and I just caught a cab. Luckily I had the name and address of the hotel written down so could just show the driver, he didn’t have much English and my Greek is non-existent. That’s the second time now I’ve unexpectedly had to find my from an airport to hotel, something to think about in future I feel.

I was a bit worried when he pulled up, I couldn’t see the hotel sign,  there were rubbish bags piled on the street corners and it all looked a bit dodgie but the cabbie kept pointing just over the road and nodding so I figured I’d better get out before he kicked me out. Anyhow the hotel was just diagonally across the road and Sarah happened to be in the foyer when I walked in so yay me again – I got from Rome to Athens!! Sometimes I think we’d be better off without mobiles, maybe we’d  think things through instead of just having a knee-jerk reaction and reaching  for the phone to yell for help whenever things don’t go exactly to plan. Then again, my phone does give me a sense of security so maybe I just need to  think instead of hitting the panic button. Yeah, that’d probably be a better plan.

4 responses to “I’m off to see the islands, the wonderful islands of Greece!!”