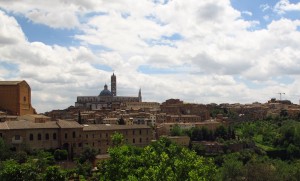 Next stop for our big orange bus was Siena. We had about a ten minute walk from where we parked to the Piazza del Campo. We, along with possibly every other visitor to Siena, took some photos along the way looking over the city at a magical spot near the Proserpino Cafe. I took a photo of the shop because there is a town in Queensland called Proserpine!

Anyhow, the highlight of Siena for me was lunch in a little restaurant somewhere down a back street. I had a local specialty(I’ve forgotten the name already) but the family told me it is a mixture of meats cooked on the bone and gained widespread use during and after the WW2 because of the shortage of meat. I’m not usually a fan of casserole type dishes but this one I enjoyed. I was pretty pleased with myself for getting off the beaten track and I loved talking to the family members at the restaurant – if you could call it talking, lots of smile and nod going on from my end. 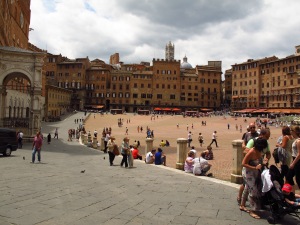 We were introduced to Siena’s traditional panforte cake at a little shop just off the Piazza del Campo. I liked the cake but the elderly gentleman who owned the shop was the real star, he was very charming, a real darling. Apparently while we were in the cake shop our own resident older gentleman, Terry, came to the designated meeting point, couldn’t find us and went off to other corners of the piazza thinking he was in the wrong spot. We waited outside for five or so minutes but he didn’t show so we had to return to the bus one short. Again, we were all craning our necks trying to find him but it’s just impossible in the crowds to pick anyone out. When we got halfway back to the bus the tour guide set us on our way and he ran back to have another look. Terry arrived in a taxi just a couple of minutes after we got there, clever man decided that would be the quickest way back. I don’t think I would have thought to do that. I felt so sorry for him, he was really apologetic and you could see he felt badly but I’m pretty sure almost everyone took the time to tell him not to worry which was nice.

Sleepers on the bus

I can’t believe how everyone goes to sleep on the bus in the afternoons, I sometimes think it would be nice to have a nap but then I think I might miss something so no sleeps for me! Jenny and I had each other just about in hysterics this afternoon talking about times we’ve fallen asleep and woken or been woken up doing embarrassing things like dribbling or talking. I have no idea how but we ended up doing our impressions of the Titanic scene where Kate Winslett is standing on the bow with her arms out, and then about 10 minutes later I looked over and here she was fast asleep – good one Jen!!

We arrived in Spoleto with plenty of daylight left for exploring, I found the remains of the Roman amphitheatre just behind the hotel and saw the locals having their afternoon chat sessions outside their shops and houses. Welcome drinks and nibbles tonight went down well, it was a big day.