I’ve really been looking forward to this afternoons outing to visit I Cipressini just below Montecatini Alto. Andrea had his work cut out for him taking the bus up there but as usual had no problems where we would more than likely have trouble in a car. We stopped near a little cemetery to transfer to smaller vehicles for the last little ride to the farm. Even the cemeteries are different from ours at home, it was really well-kept with masses of flowers and photos around. The burial ground was enclosed within stone walls with lovely little alcoves built into the walls and traditional graves in the middle. Cemeteries usually leave me feeling a bit sad but they are interesting all the same and I took a few photos. Jan, George and I elected to walk down to the farm to save someone coming back for us – we found an interesting old drinking fountain on the way and took some touristy pics of ourselves there – just for something different, not!!

I Cipressini is owned by the wonderfully friendly Simoncini family and has about 400 olive trees as well as chestnut woods. The farmhouse is quite a few hundreds years old and there are three little units behind available to rent. We had a look through one of the units and you could just imagine having  a romantic week-end there, it was rather lovely. 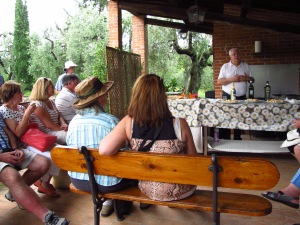 The first treat for the afternoon was olive oil tasting and appreciation class presented by Dante Simoncini who is the father of the family. He was very passionate about his olives and the art of oil making, looking around I could see everyone else was as engrossed in his stories as I was. Some people can love what they do yet not hold an audience’s attention but Dante was a real entertainer as well as having a wealth of knowledge. We had three different type of olive oil to taste, I couldn’t believe how much he poured over the bread but it was definitely ‘the good oil’ and I could even taste the differences between them thanks to Dante’s tuition. No olive oil tasting session would be complete without a few glasses of well-chosen wine would it – and they were very nice too. 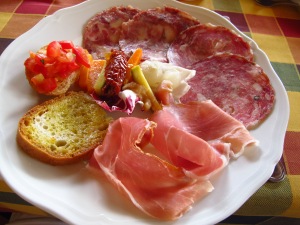 Antipasta at I Cipressini, Tuscany

We were then treated to more sumptuous food from the I Cipressini kitchen, also scoring the recipes for a few of the dishes so I’m looking forward to trying them when I get home. The pickled vegetables and a red cabbage and apple salad were two of my favourites although the meats, cheeses and wines were delicious too. I’m surprised they didn’t just roll us back down the hill to Montecatini Terme after all this food and wine.

I joined the locals promenading around the town this evening, I’m sure with a ridiculous smile on my face, because again I’ve had an outstanding day shared with some fantastic people.